I get that it’s dry in Arizona. I get that maybe the desert doesn’t have a lot of whatever it is birds eat. I’m not sure what it is, but there’s clearly something they manage to feast on because I see and hear them constantly around my house.

On several occasions my husband and I have tried to plant veggies and herbs in our desert yard but we haven’t been very successful, and I’m going to go ahead and blame the birds.

They eat just about everything, and typically either just after we’ve planted seeds (they dig them up), or right before we’re ready to pick something like a small, ripened cherry tomato. They don’t stop at vegetables, either. They love to pick the stuffing out of our patio furniture (now ruined) and tear the leaves and flowers off all wreaths hung on our front door. But this year? This year we were ready to defeat the birds!

Clearly it runs in the family

Dad with tomatoes the groundhogs left behind...

I grew up in Ohio with a family that always had a garden. Huge gardens, in fact. When I was really young the garden was really big. Each garden got progressively smaller as my family moved to a few different homes, but still, the gardens were big. Along with the designated garden area, there were spots where other vegetables grew, too, since my parents couldn’t seem to leave any piece of dirt unturned.

My mom and dad were really good at growing just about everything (my dad was a landscaper), although they had countless and continual run-ins with groundhogs, rabbits, deer and other critters that also enjoyed the fruits (and vegetables) of their labor. They had their creatures that loved their garden, and we had the birds that loved ours.

My parents’ garden was always lush, and my dad was always infuriated. Why? Because of the groundhogs that were constantly in his garden, somehow breaking through all types of fencing he put up. He would yell and shake his fist at them, trying to shoo them away. After he tried the humane traps (which the groundhogs were usually too smart to fall for), he attempted sitting and waiting with a bb gun (also unsuccessful). His rantings would keep my family in stitches, even though it really was a shame they would eat so many of his plants. Those groundhogs grew to great sizes off the goods of the garden. It was a wonder my dad couldn’t catch them with his bare hands they were so big and waddled away so slowly!

My parents are from Italy and when my husband and I moved to Phoenix, they were thrilled to learn that many of the same fruits and vegetables they had in Italy could be grown here: fig trees, citrus trees, artichoke plants, olive trees, prickly pear cactus.

These were the things they couldn’t manage to grow in Ohio due to the mostly crummy weather. No matter how bad the winters were, my dad always said that Ohio had the most perfect weather anywhere in the states. Hmm. Okay, well, most people aren’t quite in agreement with him on that, but weather notwithstanding, my dad planted and tended to fig tress he kept planted in the yard during the summers and in large pots in the garage during the winters. He even built special dollies he used to carefully cart the trees in and out of the garage. They did, eventually, bare fruit. Not the big, juicy fruit he hoped for, but fruit.

When my parents would visit Phoenix, they were overjoyed to see such hard-to-come-by (in Ohio) fruit trees and plants all around town, lining the sides of the roads. Our first home in Phoenix was an apartment and after moving in, we bought a tiny, skinny fig tree (Figgy) and planted it in a pot on our patio.

Figgy did very well in that pot, growing taller and even developing giant leaves. Before Figgy could outgrow her pot we moved to a house with a yard, where we promptly replanted her so she could finally branch out and stretch her roots.

The figs still need to ripen

We also planted a prickly pear cactus (which my dad helped pick out), and orange and lemon trees. It took about eight years before the citrus trees produced fruit, but once they did, we (and my parents) were thrilled!

Figgy took a bit longer, but eventually grew to produce hundreds of figs. The prickly pear cactus on the other hand, never bore fruit. Living in the desert for a while, we eventually discovered that not all prickly pear cactus bare fruit. This was something my parents could never comprehend. Every year when they came to visit they would tell me to go back to the nursery where we bought the cactus and tell them there’s something wrong with it. We would try to explain the situation to them, but they just couldn’t imagine a prickly pear cactus with no fruit!

We’ve lived happily with the cactus with no fruit and our lemon and orange trees. We often sent oranges and lemons back to Ohio to everyone’s glee.

But Figgy? Figgy is another story. She’s big and beautiful and has large broad leaves. She almost looks regal as she stands so tall, and she produces hundreds of figs. The birds love her as much as we do. Each spring into summer, when the green fruit begin to appear, we get so excited. I call my parents and tell them, “The figs are here!” and they would share in the excitement.

But every year, heading out to pick the ripened purple fruit, we would discover the birds had ruined it for us — those birds (imagine me shaking my fist)! They love our figs as much as we do, and they eat way more than their fair share. But instead of eating one entire fig and moving on to the next one, they take two or three bites out of every, single fig so that they’re ruined for us to enjoy. It’s so wasteful, not to mention aggravating, and I now understand how my dad felt about those groundhogs nibbling away at his garden!

We finally have a garden

This year we planted a raised bed garden in our yard. We bought our seeds, seedlings and netting (to keep the birds out) and planted what we hoped would soon be our thriving garden.

The netting covered all but one small piece of the garden box. “Oh well,” we thought. “No biggie.” We figured the netting in general would distract the birds and they wouldn’t even notice the small open section. WRONG! Via the small hole, the birds were not only able to eat some of the seeds we planted, but they took several bites from the first tomato to ripen. Of course they did! So we bought more netting to cover the holes, and believe it or not, we’ve got a bunch of vegetables growing!

The garden looks great if you can see past the mish-mash of netting draped over it. A more organized set up is something to address next year, but for now, we have a garden! Also on our list: Drape Figgy with some netting, too. Since she’s huge, we’ll only be able to cover a portion of her, but that will hopefully leave us with enough figs to make a little jam and some other goodies (more to come in the months ahead). 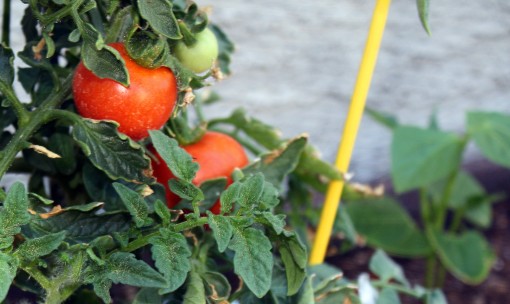